I didn’t realize I didn’t get anything posted Friday.  I’d intended to at least do SotD . . . but work is getting just really busy recently, with preparations needing to be done for the new version of our software there.  I might have to refresh my knowledge on Windows Server admin stuff, and basically give myself a crash course on being an all-around-admin again.

This weekend so far has been fantastic.  Nothing I should really post any details about here.

I really need a new Pointless Poll.  I just don’t have any ideas for a topic for it right now.

Status: Going ok.  There are a few things I should probably be concerned about . . . but I’m just not stressing right now.  It’s . . . differently nice.  That’s a really awkward word combo, but I’m going with it anyway.

Link of the Day: fmylife.com – This site has just provided me with entirely too much entertainment.

Pic of the Day: Cool Lightning

Quote of  the Day: “I’ll insert a few vaginas here and there, but beyond that I’m sort of useless.” – Name withheld by request

So, heady out-of-sorts stuff that had me all twisted up inside previously, working out better.  Not ZOMG wunderbar better, but less worrisome with positive potential better.  I slept well last night.

Link of the Day: “People are mourning the death of their money.”

Quote of the Day: “I put the sexy in dyslexia.” – Paige Reynolds

Big heady stuff that has me out of sorts.  I took ages to get to sleep last night, and slept terribly.  Far too much on my mind, desiring discussion and resolution.  Just can’t go into it right now.  So . . .

Link of the Day: The Web Site is Down – Episode 2: Excel Hell (honestly, nowhere near as funny as the first one)

Pic of the Day: Where has all the Money gone?

Quote of the Day: “Wow, stop hurting my brain with your lack of one.” – eric.hock

Spam of the Day: “Serve the Lord, Not debt”

Quote of the Day:  “A kiss is a lovely trick designed by nature to stop speech when words become superfluous.” – Ingrid Bergman

This has been a frustrating week for me.  Weekend was good overall – at least Friday and Saturday, anyway.  Then I came down with “crap, I’m sick and getting sicker” Monday, rushing out that morning before work to pick up Zicam swabs, Airborne, some multi-symptom cold meds, etc.  Tuesday was bad enough I got sent home early from work.  Wednesday I was late, but then was feeling, so I thought, “better” by late afternoon and stuck it out until the end of the day (though, I have to admit, my productivity level Wednesday was way below usual, my mental focus was about as clear as a bale of unginned cotton after being shat upon by Godzilla).  Yesterday (Thursday) I was feeling so absolutely miserable yesterday morning I called in sick.

That really stresses me.  I’ve used a sick day, in Mid-March.  Not even halfway through the year, and 1 of my 2 sick days is gone.  Despite (truthfully, probably because of) past issues, I’ve really been working on trying to fix some of my bad habits, and have been doing pretty well.  With 2 sick days, I intended to not use one unless I was flat out, down-right unable to physically get myself moving out the door and make it in, or unless I was informed by a doctor that I was a horrific raging source of contagion or something similar.  I take my multivitamin everyday, I’ve been working on eating healthier and losing weight (and oh, I tell you, the most tempted I’ve been to break down and eat carb-laden comfort has been while I was sick this week), and being sick, especially with this particular timing that’s costing me so much productive time, has been extremely irritating.  What have I gotten done on the apartment this week since I moved in?  I’ve got my two desktop computer systems – more or less (no speakers on either yet) – up and running, and the router running.  I’ve done a little bit of laundry.  I’ve taken one small load of trash out.

That’s pretty much it.

Lots of boxes and bags with stuff strewn haphazardly over the living room and near my closet?  Yeah, still there.  Practically untouched.  Frustrating.  Depressing.  I should have been spending time this week getting that stuff sorted out.  Instead, I’ve been either sitting in a chair like a zombie, or been zonked out in bed trying to let my system hurry the hell up and get back to a state where I can DO things.  Today, Friday, is finally the first day this week that I feel almost human again. I’m still clearly sick, lots of stuff wanting to come out of my nose or run down my throat, but I sort of actually feel like someone who’s started to rally and is watching their body fight this thing as a winning battle . . . albeit entirely too slowly in the endgame.

I’m going to go buy a microwave tonight, and hopefully a couple of other little things.  I’m going to look at some furniture options again this weekend sometime.  I’ve decided I definitely want a different, better computer desk, because the mess of kitchen table and little Wal-mart desk I’ve been using just doesn’t work well for my setup.  A couch would also be rather convenient.  Oh, and I’ve got a ton of stuff I need to sort out, get put up or away, or get rid of, the sooner the better.  I’m tired of the mess ‘o boxes.

Link of the Day: The Paris Meter

Spam of the Day: “Your personal bailout”

Pic of the Day: 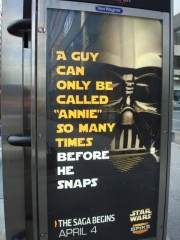 Quote of the Day: “It smells like you took a shit in the ocean and then put it in a jar and sealed it up for about two months.” – James Cross

Moved this weekend.  Started last night with a little tickle in my throat, which turned into an itch today.  Doing what I can to try to stave off a full-on cold with Zicam, Airborne, eating and drinking plenty.  Has my energy level pretty much zapped.  Lots of stuff I could write about the moving process, but just not feeling up to it.  Apartment is pretty much boxes and chaos, with maybe 20% of stuff unpacked/sorted out.

I need a microwave, and more furniture.  More money would make all that easier, but have to go gradually on it.  It’s just kinda frustrating.

Why, out of everywhere I’ve been and everything I’ve done, does it seem like I’m finally putting things in my life together for once (again) after coming back to Midland?

Spam of the Day: “Was a pain pump used on you?”

Pic of the Day: Where do I go to adopt one of these?

So, a couple of days ago, AOL started blocking older versions of the ICQ protocol.  I noticed this yesterday when my Carrier (the multi-IM client formerly known as FunPidgin, a branch of Pidgin) started telling me I was using too old of a version of my client, to please upgrade.  Now, all things said, this is kind of a minor thing . . .  I so rarely ever communicate via ICQ with anyone anymore, but I’ve had an ICQ number longer than any other IM identity, and what’s important, dammit, is that the potential for communication via ICQ is there.

I was still running Carrier 2.5.0, and I discovered today that 2.5.4 was available.  I upgraded, hoping that would fix it.  Nope.  I searched in vain online for information on this, news, fixes, newer code from a repository – something.  I found a slashdot article about the ICQ version change thing, which talked about a lot of IM client which I don’t use, and Pidgin’s site says that some folks in some areas were having issues with ICQ, and to just upgrade to 2.5.5, and that pretty much fixed it.

So, after some experimentation and fiddling around, if you want to fix your Carrier 2.5.4 to work with ICQ again . . . simply get the Pidgin 2.5.5 client, install it somewhere (another machine or something – I used a virtual machine, thank you VMWare) where it won’t muck with your main Carrier install, and them simply grab the liboscar.dll from the new Pidgin 2.5.5 install and replace the liboscar.dll in your Carrier install with it.  Start up Carrier and re-enable ICQ, and things should be fine again.