This girl might be one of our True Dungeon volunteers next year.  After I saw her talking to Jeff Martin at the Dwarven Forge booth on the exhibit hall floor, I seemed to run into her and her two male friends/brothers/whatever repeatedly that day. 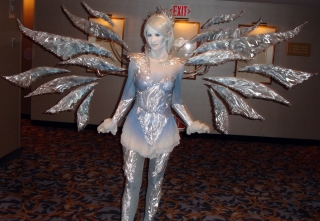 I went to GenCon Indy, as a Full-Time Volunteer for True Dungeon, as I’ve done for the previous 5 years.  It was fun, it was a lot of work, my feet (especially my heels) were in massive pain for days after I got back from the con.  I played one fun game, helped build, run wiring for, DM’d a couple of rooms for, and tore down a multi-dungeon set.  I wandered around the convention center exhibit hall, demo’d a couple of games, bought one The Spoils 2-player starter set, looked at lots and lots of art, hung out with people I like, and bought a few pieces of art (which I’m still waiting for, they haven’t arrived yet).  I took some pictures – mostly of people at the con or nifty things that caught my attention.  Not much of the dungeon.  There are a lot of dungeon pics, if you check the official web site, or search for True Dungeon 2009 on Facebook, you’re sure to find some.

I don’t really feel like going in-depth about the con.  It wasn’t quite as fun as I’d have liked, I didn’t get to do quite as many things as I wanted.  I’ll still do it again.  But dammit, next year, I’m staying for the Dead Dog party.

I’ll try to post a pic from the ones I took at GenCon here every day or two for a bit.  Here’s the first one, which I simply call “Umbrella Girl:”

Update: Car news is sounding sucky thus far, and expensive.  TWICE module in my Saab is basically destroyed by corrosion.  Ugh.  He’s tried to find remanufactured ones for it, to no avail, and a new one has to be gotten from a Saab dealership, and is over $700 in cost (I forget the exact number, but I think it was closer to $800).  It also has to be programmed by a Saab dealership.  I’ve found a site called LostSaabKeys.com that says for $595 they can try to read the info off my old module, and if they can, and if the data isn’t corrupted, they can program me a new TWICE module and send it back to me.  Ronnie Littlefield thinks my TWICE module is too far gone to be able for anyone’s system to communicate with it at all, and advises me to just stop wasting money with him and get it towed to the Saab dealership in Lubbock and have them fix it all.

At this point, it’s more a question to me now of, what’s the sane cutoff point of money to throw at this car?

Link of the Day: “Where I Write” – pictures of SciFi Authors and where they write. (Thanks James)

Spam of the Day: “Look at cars they drive”

Pic of the Day: Spock’s Ship “Jellyfish” done in Legos

Update:  So, what do I post for an update.  Weekend.  Weekend was the least active one I’ve had in a couple of months.  I stayed at home.  Pretty much all weekend, except for a short trip to Wal-mart Friday evening with Ivy, so I could grab a couple of things (primarily, more cereal.  Apparently, I’ve -really- missed raisin bran more than I knew).  Otherwise, I stayed in all weekend, slept a lot to catch up on not having enough for a while (I slept in WAY late on Saturday), watched a lot of Top Gear (all of Season 1 and a couple of episodes of Season 2), and drank some wine.  I’m pretty much out of Bota Shiraz now.  I -might- be able to get another half-glass or so out of it.  I didn’t really clean much – I did some dishes, tidied up the kitchen a little, but didn’t do much beyond that.  I really need to vacuum, still haven’t done that.

Was I moping?  Maybe I was just being practical, given that my car is sitting in the shop, with still no prognosis (I’m giving Littlefield until 3ish, and if they haven’t called me by then – which they won’t, of course – I’ll call them for a status update), and I needed some sleep and me time.  I had offers for companionship, which I rejected.  Some of it, genuinely because I didn’t really want anyone to intrude (oh, and Saturday, my left shoulder was sore and aching horribly) on my solo veg time.  Some of it, maybe . . . because I just didn’t really think that being with someone else I didn’t really want to be with when the person I wanted to be with was off with someone else for the weekend would make me feel any better.

Some friends had a poker game Saturday night that I’d have really liked to be able to go to, but I lacked transportation, and they couldn’t find anyone willing to give me a ride to and from their place.  Understandable, I guess, but I really would have liked to have been there.  I could have used the companionship and fun.  Does that seem to be a contradiction of the other offers of companionship I mentioned above?  All I can say is, they’re different sorts of things, really.

I’ve already had a couple of texts from one woman hinting that she wants to do something with me tonight.  I haven’t figured out yet how I’m going to decline.

Pic of the Day: Kermit the Frog + Internet Horror