Update: This update is late.  A week and a day late, in fact.  I originally intended to post it last Thursday afternoon, after I had started having a fucking terrible day about 2 minutes after I stepped out of the door of my apartment in the morning to head to work.  Last week, things were really busy at work, quite hectic, as we were preparing for the software launch of our new version at work to our sister company (the Home Health Therapy company).  This week has been really busy too, and today is the first time I’ve had spare time enough at work this week to actually write something.  I have this spare time, because this morning, James “pulled the plug” and pushed the release back another 2 weeks.  This probably makes for a better product on launch, and a more prepared, relaxed launch . . . but it kind of bites, because I thought my weekend was mostly figured out: I was working.  For however long it took to get everything done.  Yay Overtime pay.  Now, I’ve got an entirely open weekend, with no money (not -technically- true, I’ve got like $8 left in checking after rent), and no transportation.

No transpo?  Yeah, getting back to the terrible fucking Thursday last week . . . It rained Wednesday night/Thursday morning.  Lots and lots of rain.  Here’s an example of what I’m talking about: 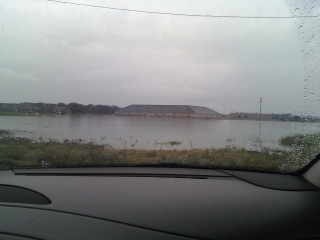 That’s the sort of open field that dips down a little across from my apartment complex, and behind a host of businesses right along on the Loop 250 service road.  It stretches from this paved alley behind them that runs from Midkiff to my apartment complex, up to Caldera.  It was basically a humongous pond, or a shallow lake.  Unfortunately, so was a good stretch of Caldera.  I stepped out of my apartment that morning, greeted by this continuing rain, water all over the parking lot, in a rush to try to make it to work and Not end up a couple of minutes late.  I hopped into my trusty (so I thought) car, and drove across the parking lot, and saw Caldera underwater.  Hmm.

Keep in mind, this was right at pretty much 8:00 a.m., I hadn’t had been awake very long yet, and what little caffeine I had in me thus far had not kicked in yet.  I’m not fond of mornings at the best of times, unless I approach them from the “still awake from being up all night” angle.  This is the only defense I can make for the terrible decisions I made.

I decided I’d try to make it across a bit of Caldera to Crista Lane on my way to work.  This was a bad decision.  The water was really quite a bit deeper than I thought it was initially.  This is something I discovered as I was trying to begin my turn towards Crista Lane on Caldera, as my car’s engine sputtered and died.  Then, being sleepy and stupid and panicked, I tried to restart it.  Only afterwards, reading on the web, did I realize just how terrible of a thing that potentially is.

A City of Midland Transportation Services truck happened to come driving by (though the water – that truck has ground clearance of about up to my windows) right as I was getting stuck.  They radioed for for someone to come get me out.  A couple of police cars, an ambulance, and a fire truck all showed up, with a wrecker supposedly on the way.  Two firemen got out of their truck, put on waders, and pushed my car out of the water up onto Crista Lane – so the tow truck ended up being unnecessary.  Later that morning, Corey pointed out a bit on the CBS7 web site about a water rescue being reported in Midland “near Loop 250 and Midkiff.”  That was probably the host of vehicles with various sorts of flashing lights that showed up for me.

While I was waiting, in the water, I took a couple of pictures.  This one, when, hrm, I felt something wet on my ankle: 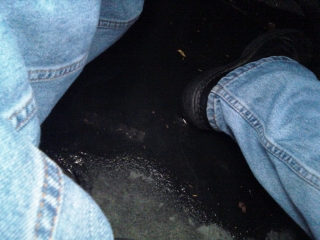 Water was coming up from under the car, through whatever various holes or crevices or whatnot, and filling my floorboards.  It got to being a couple of inches in each of them.  Not fun at all.

Here’s a view from my car while I was stuck in the effing water: 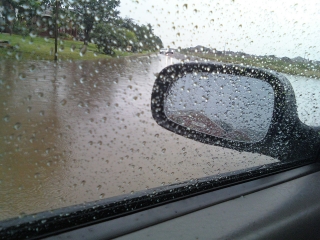 Tried to do what things I could Thursday afternoon after work, Friday after work, and then Saturday, to get my car driving.  No luck.  Sunday, Kara and Matt came over, and we pushed my car back to my apartment complex, parked right downstairs.  It doesn’t start, and the electrical system is haywire.  I reached out to my dad for help, having no other real alternatives.  Finally got my car towed on a car carrier to Littlefield Automotive Wednesday during lunch.  Haven’t heard anything from them yet, going to call in a bit and see what, if any news, they’ve got for me yet.

I’ve been really severely stressed most of this week and last weekend.  Stressed about my car, about everything going on at work right now in crunch time (well, until this morning anyway), stressed about money being entirely too tight until my next payday.  Having a non-functional vehicle, and that adding unknown added costs to repair it (or possibly end up getting a cheap used vehicle if repair on it is too costly to be considered feasible) and having to work something out with my dad, probably on a payment plan basis, just added heaps of stress for me.  Some of that is why I haven’t posted a damn thing on this site until today.  It was just something that so seriously wasn’t anything of a priority for me.

So, yeah, that’s a bit to catch things up.  All I really feel like writing about it for now anyway.  Linkage commences:

Spam of the Day: “Time For a New Copier?” – from, of course, Copier King

Funny of the Day: “Try and spell shield that“

Pic of the Day: Interesting Top